A Simple Way to Worry Less 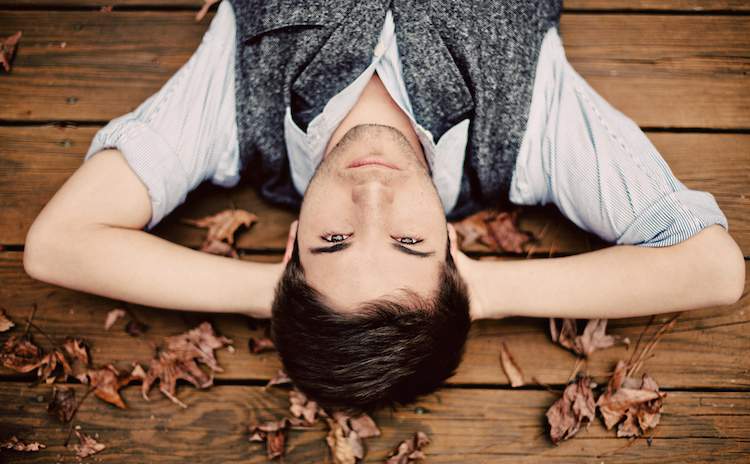 What are the things you worry about most often?

Do you worry that you’ll be late for work, or you’ll miss an appointment?

Do you worry about your health, or not being able to pay your bills?

We tend to worry about relationships, career, or whether we’re living a meaningful and full life and not missing out on anything.

The things we worry about are endless. As long as we’re alive, breathing and thinking, we can worry about anything and everything.

Is worry part of our genetic and evolutionary makeup, or is it something we acquired?

If I were to guess, it would be the latter. We were not born worriers. We were born with trust and a blind faith in life. We were made, or, more accurately, turned ourselves into worrywarts.

Today I’d like to focus on the worries that pester us most of the time. On the surface a tiny bit of worry may not be that bad. But compound it over years and countless situations and it turns into a harmful process. I feel I have the worry habit.

The worry habit manifests itself in unease that runs in the background, especially when I’m dealing with non-routine situations. I feel stuck in my head, moving from one thought to the next and dreading undesirable outcomes.

Life, as the great teacher that it is, has presented me with more than a few situations that proved my worry wasn’t only futile, but completely irrelevant as to what actually transpired.

Here is a recent example.

A couple of months ago I went to a local clinic to donate blood. I didn’t think I would qualify. To my surprise I met the criteria. I thought cool. But deep inside I wasn’t that cool.

When a nurse examined me, my heart was racing and I had a higher than average temperature. I didn’t know where that came from, other than worry and anxiety. She recommended that I take a break and have some water. I did, and took a few deep breaths. It worked. I moved on to the next phase.

Then I was told that they might not be able to use my veins. But an awesome skilled employee found a way. It felt great to be able to contribute and help out, in this way, for the very first time.

The thing that I worried about (not qualifying) didn’t manifest. But other things came up that were not on my thought radar. I was told for the next donation to hydrate well and eat a good meal.

So come next time, I drank a lot of water the day before, had breakfast, meditated, and tried to relax as much as possible.

I checked into the clinic and … I didn’t qualify right off the bat. My hemoglobin count was lower than the requirement (probably because of the previous donation). I did not see it coming.

As I was chatting with the receptionist about my registration, she came closer and whispered to me: don’t worry about it. That was the point when I realized I needed to do something differently.

Most of the thoughts in this article were inspired by this experience.

Worrying is not active planning

Planning is planning. If we need to prepare for something ahead of time, we do it and let go—without worrying about what’s going to happen next.

Worrying is not an effective pain reduction strategy

When things didn’t work out, they didn’t for reasons other than what I’d worried about. The disappointment I experienced wasn’t lessened by how much I worried. The worry drained my energy without any benefit whatsoever.

Worry does not prepare us for disappointment. Nor does it reduce the pain of undesirable outcomes.

We will feel the same way when reality reveals its hand—whether we worry or not.

You will notice most of the time that what you worry about doesn’t come to light. Or something else will pop out of the blue and force you to deal with it as the reality of the moment.

Which leads me to the following point.

The fallacy of expect the unexpected

To me thinking that I’m expecting the unexpected is dumb. It’s a waste of time and energy. If I can foresee the unexpected, then it will become expected. The unexpected remains a mystery that, if meant to unfold, will come out of nowhere and catch us completely off-guard.

We can’t anticipate every possible negative outcome and worry about it in advance. Life does not work according to our worry spectrum. Things will happen, whether we worry or not. So why worry?

Stepping out of auto worry (breaking the worry cycle)

The best approach starts with putting a step between the worrisome thought and the programmed emotional reaction.

If a worrying thought comes up and you feel it’ll turn into a nagging feeling, take a step back.

Separate yourself from the thought.

A conversation with a friend

Imagine that a friend is talking to you about the situation. This person would describe the thought and feelings to you. What would you tell them?

Stepping away from the situation makes it easier to take a rational, practical, and uninvolved approach that will mostly lead you to say: Don’t worry about it.

If your friend shouldn’t worry about it, then why should you?

Awareness is the starting point. Whether you catch the thought as it arises, or you find yourself in the midst of deep and familiar worrisome feelings, it doesn’t matter. The main thing is to make a conscious choice to stop the moment you become aware of what’s going on, take a step back, and start a conversation with a friend.

Practice. “Don’t worry about it” is simple advice, yet it goes against a deeply conditioned emotional response. So it takes practice and more practice. Don’t give up on yourself.

No barking orders. If you decide not to worry about it, treat yourself like you’d treat a friend. Be kind and gentle and don’t dictate to yourself what you should be doing. The ego is like a petulant child and most likely would disobey forced action. Instead lean into it with an open heart and a curious mind.

Don’t worry about worrying. If you find yourself worrying, after you made the decision to not worry about something, simply start a new dialogue.

Imagine a friend telling you that she can’t stop worrying and how she’s feeling. What would you tell her?

You probably would say something like this: Don’t be too hard on yourself. Do the best you can. If the worry persists, feel it, breathe through it, and let it go every time it comes up again. The same applies to you.

Worry happens. But we don’t have to let it run the show, taint our perception, and create needless suffering.

If things don’t work out, we can deal with them after the fact—when we know what we’re dealing with.

Don’t worry about it—in most cases—is the best advice we can give ourselves and others.

PREVIOUS POST: Permission to Enjoy Yourself Now (Not Someday)