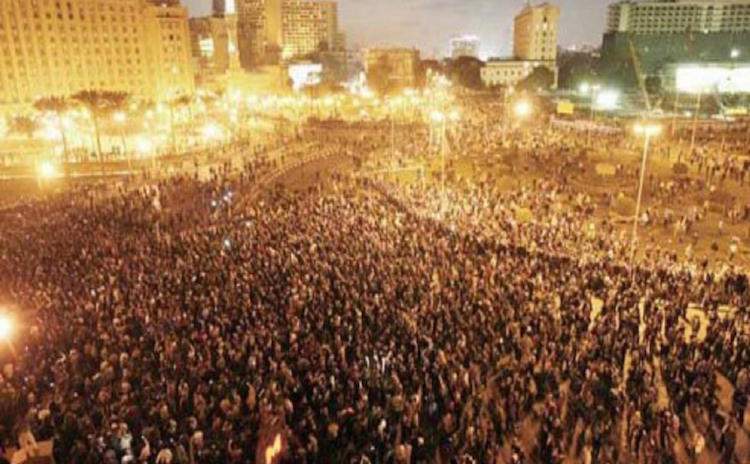 If a while back, someone told me that in less than two months the Tunisians and Egyptians would revolt and prevail—peacefully—against decades of ruthless totalitarian regimes, I would’ve laughed. I would’ve gone further to say that it wouldn’t have made sense even as fiction.

Not in my wildest dreams, could I have imagined how fast things would change.

This is by no means a political commentary on what transpired, but a reflection on the collective human narrative and experience.

One of the most famous poems we had to memorize as children in school was, funny enough, by the Tunisian Poet Abu Al-Qasim Al-Shabi. He wrote these words more than 70 years ago. Here is a translated excerpt.

“If, one day, a people desires to live, then fate will answer their call. And their night will then begin to fade, and their chains break and fall. For he who is not embraced by a passion for life will dissipate into thin air, At least that is what all creation has told me, and what its hidden spirits declare…”

I grew up with the poetry of rebels and textbooks full of what was. To my generation and the ones that followed, what we learned was just words.

Helplessness and cynicism were the norm. It was beyond anyone’s ability to change such dire circumstances. The only change possible was when a mighty country would take action, and if you’re lucky, it won’t be to the detriment of your people. In most cases that didn’t work out too well.

Fast forward to today and it’s a different world. What happened? What changed?

People awakened to their true power—the power of choice. And with a world open and connected now more than ever, others embraced every one of the demonstrators with open hearts and fast fingers willing to share every word and image. The truth was way out there.

Regardless of the outcome of people’s uprising in Tunisia and Egypt and the domino effect it’s having in the Arab region, a new reality has set in for many people. We can choose and shape our destiny.

Humanity, through choices of millions of people, became unstoppable. Our consciousness is shifting and adapting to a new world order. One that is determined by people’s choices and connection.

Every single individual of the millions demonstrating made a choice—a brave choice to walk out of his or her home, unarmed and say no to the status quo. The masses are nothing more than the sum of individual choices.

It all started with one, then two … three … a hundred … a thousand … a hundred thousand … a million, amassing to millions—one individual at a time. The soldiers chose not to open fire at civilians. Every choice counted. When one was killed, ten took his place.

People chose to shatter the barriers of fear and overcome apathy. Each person decided to show up and stick around. And all those people being there is what made history. All the threats in the world cannot stop the true will of the human spirit.

When we realize we always have choice, we take responsibility for our decisions. This realization empowers us to change direction if or when we choose to. And that is the root of our power.

The myth of leadership

If you’d ask any autocrat, he or she would say people need to be governed and shown the way. I say this is bunk.

People don’t need someone to lead them so they can blindly follow. People have proven time and again that they can self-govern better than any government. This becomes more apparent in times of crisis when individuals choose to take supportive action of their community and reach out, by their own choice.

Organic movements like the ones we witnessed in Tunisia and Egypt were not born in think tanks, nor instigated by the opposition elite. They started by people, like you and me, reclaiming their birthright—to be free to choose.

No one lead such movements and not a single person can take credit for starting them. But every individual who participated, who wrote, who shared, who supported can take credit for their part. Human evolution is a collective experience that cannot be attributed to certain ideologies or a few individuals who call themselves leaders.

People adopt a message or march for causes that resonate with them. They stand up for what inspires them. Inspiration is what makes the heart sing and the soul weep.

True and meaningful change comes from within—by choice. It comes from you and me and every other human being on this planet. Every one counts, no one is unimportant. We are what changes the world, one choice at a time.

True change doesn’t come from subjugating others, but from inspiring them. To inspire others is to focus only on your own actions and choices and allow others to do the same.

We are always making choices, sometimes we make the wrong ones. And that’s okay. We can learn from our mistakes and change direction without blame or victimhood.

We may not be able to choose how we feel, but most definitely, we can choose how we act, in spite of how we feel. We can overcome and embrace the truth of our humanity and our shared aspirations to be free and live in peace and harmony with life.

We all have the greatest super power in the world, the power that sparks change, transforms and inspires—the power to choose.

PREVIOUS POST: What’s Love Got to Do With It … Everything

NEXT POST: How to Let Go of Expectations and Opinions of Others