From a Refugee with Love 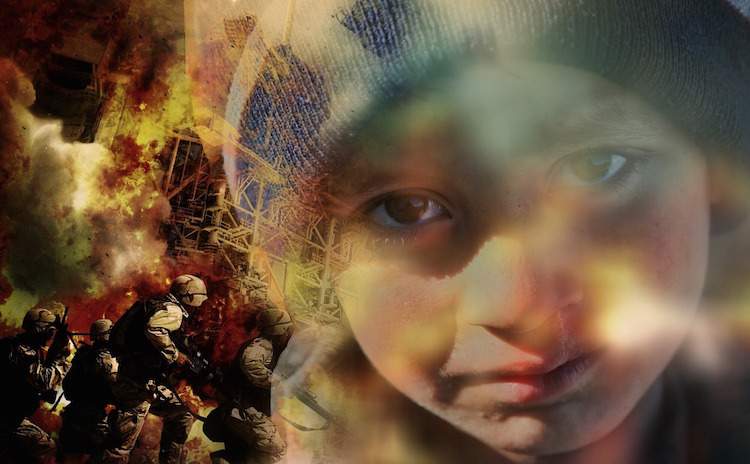 I was born a refugee. I didn’t go anywhere, or do anything. My fate was sealed from the moment I was conceived. I inherited the refugee status from my parents.

I’ve never shared this publicly, as I didn’t want to be defined by the word refugee and what it represents.

Today, as I look back at my own experience, I hope I can shed some light into the human beings behind a label that remains a social stigma and a hot political topic.

I was fortunate enough not to be in a refugee camp like many many human beings have endured throughout history.

I grew up in Kuwait, in a middle class family. But I was stateless—meaning I am not a citizen of any country. As a Palestinian refugee, I had a number from UNRWA (didn’t need or receive any support). I held a travel document from Egypt that didn’t grant me access, without a visa, even to Egypt.

I was detained in airports, stopped and questioned, and denied entry to certain countries. All because of the travel document that clearly stated I was a refugee. And let me remind you that I did nothing, other than being born.

When I immigrated to Canada, I wasn’t accepted on humanitarian grounds. I was educated, I had some money, and I had a job lined up. No one ever helped me because I was a refugee.

There is no finger pointing or blame here. It is what it is. This is a part of my story that remains painful to talk about. And I was one of the lucky ones who grew up in a place like Kuwait, where I was able to get an education, and have a relatively decent life. Most refugees are not as fortunate as I was. They are the ones I invite you to think about today.

Let’s start with the negative widespread views and attitudes.

Perception of refugees: the unchosen people

Here are a few of the views and opinions I personally encountered. And, unfortunately, I still hear today.

Refugees are a burden.

It costs money to take care of a person, or a family. There is housing, food, and basic needs, not to mention all the legal paperwork and bureaucracy.

Refugees take away from the resources that should be allocated to citizens, not foreigners.

The influx of people from a certain country will cause a radical shift in age, ethnic background, and other distinctive characteristics of a society.

A country will lose its identity with more foreigners.

Refugees threaten the existing culture and way of life.

They come with their own beliefs and traditions, which oppose the freedoms and beliefs of the host country.

They will become the majority at one point and change the country for the worse.

Refugees will want a solution to their problem and that will cause tension among nations. They expect others to deal with their problems.

They are not strong enough, or patriotic enough, to stay in their countries, and fight back. This one is extreme, but it’s been said before.

These perceptions and views are not just harmless opinions. They eventually become acceptable grounds for discrimination and abuse.

The reality of being a refugee

It’s easy to judge others when we’re sitting in our homes, feeling safe, and going on with our lives.

It’s a completely different situation when someone is trapped in the chaos and madness of violence and war. What would we do in their place? I don’t know.

I witnessed one war in my life. I was stuck because my family couldn’t go anywhere else. And that was a short war, when Saddam invaded Kuwait in 1990. It lasted a few months. But the ramifications lasted for many years thereafter. Something in me broke during that time, and I’ve never been the same.

So I invite you to look at things differently. Look beyond the label and see the people that destiny (or chance) placed in horrific circumstances that I wouldn’t wish upon anyone … ever.

It takes guts to leave everything behind.

How many of us would pack a few things and walk away from our lives? What would it take for you to uproot yourself?

It takes tremendous courage to trust in the kindness of others–while witnessing the worst in humanity. It’s one of the most difficult things any human being can do—to uproot their families, in the hope of a better life somewhere else.

Refugees risk being rejected, discriminated against, or caught in the crossfire.

No one ever likes to feel they’re a burden.

Growing up and feeling that you don’t belong anywhere is one of the most disheartening feelings anyone can experience.

It’s one thing to say I’m a citizen of the world—by choice. It’s a completely different thing to feel that you’re unwanted. You want to leave, but you have no place to go.

Being a refugee is not a fun adventure that people will ever choose for themselves, or their families.

Most people, who took a chance, want to work and live in peace. They don’t want to be a liability.

Many countries impose restrictions on what refugees can, or can’t, do because they are foreigners. And that will limit their chances of contributing to society.

Some people become refugees not by choice.

I inherited the refugee status. And I’m sure there are millions like me who happened to be born to an unfavored group at the wrong time in history.

In this case, to be labeled and judged for having a refugee status is the same as being judged for your skin color, or your height.

Choosing trust and compassion: What would happen if we welcomed refugees with an open heart?

It saddens me beyond words to listen to political debates and countries talking about how many people they can absorb. We talk about people as a liability that needs to be fairly distributed.

My thoughts on refugees are the same as on immigration. You may agree or disagree with me. But if you stayed with me so far, please hear me out for a few more minutes.

As a naturalized Canadian citizen, who immigrated to this country 20 years ago, I can surmise the following from observing life in the parts of the world that I travelled to, or lived in.

I’ve come to realize that the Western way of life, that is envied by many, works because of the way the society is built. I look at the mix of people, especially in Canada and the U.S. and see the following.

Having people from different backgrounds, ethnicities, and beliefs will open up a society, not close it, or make it worse. The more we know each other, the less we fear.

Not only do we mix races and customs, but also we mix talent, abilities, and genetics. It’s a win for all.

No life is ever a burden, and nothing goes to waste.

Taking care of a human being is not a burden. A refugee may need food, shelter, clothing, and medication. And the government will pay for it. But where is the money going?

Isn’t it being paid to local landlords, to retails stores, and to doctors who work in the community? And all these service providers will earn more money, and pay more taxes. Where is the burden or waste? It’s money recycling through society and helping more people.

Refugees are not extremists or terrorists.

Some people might have rigid beliefs and radical views. Which is better, to treat them with kindness and compassion, or to alienate and marginalize them?

What do we have to lose by choosing kindness? If they remain radical, we’ll deal with that. But our compassion might change their views because they feel included and respected.

Alienating people, on the other hand, will only fuel extremism.

Most people on the face of this planet, refugees or not, want the same things. They want to feel safe, to take care of their families and to live in peace.

The very (very) few exceptions that will take to violence will be dealt with if, and when, the time comes.

We are all connected and equally responsible for each other.

It’s easy to isolate a certain country, or group of people, and say they need to deal with their problems. It’s not our cross to bear.

Look at any conflict in modern times and you’ll see that violence doesn’t come out of nowhere. There is usually a problem or grievance, and then there is an opposing view. Both are harmless—until weapons become available. Who supplies the weapons for conflict, who transports the weapons, who pays for the weapons, and where does the money come from? All these parties (and countries) need to share in the responsibility.

Taking arms dealing and financing of war and violence out of the equation, let’s remember that all modern countries are made up. Those of us, who are lucky to live in peaceful places, can share the goodness with others who are less fortunate. We don’t own our countries; one day we will leave borders, flags, citizenships, and the entire world behind.

They say history repeats itself. And I add by people who refuse to learn the lessons of history. What I learned about humanity is: Nothing lasts forever and things can change in the blink of an eye—for any person or country.

We may not be able to change what’s happening. But we can choose to respond compassionately. We can choose love over fear, trust over doubt, and kindness over indifference.

The world is a better place when we lift each other up, not knock each other down, or worse kick others when they’re down.

Thank you for being here. I love you and I fully believe in your kindness to all of life, everywhere.

P.S. If you’d like to know more about refugees, check out UNHCR and UNRWA. Please ignore politics as much as you can, and look at the suffering of human beings who are just like you and me.