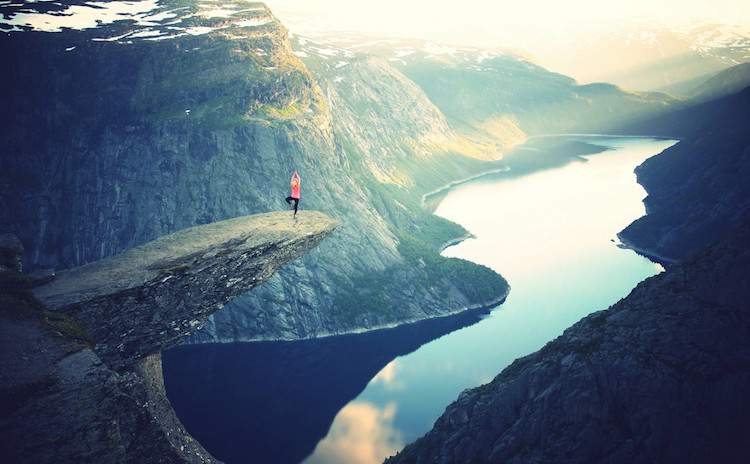 Do you consider yourself brave? What does courage mean to you?

Who is more courageous a Zen monk, or a stripper? Or are they both equally brave?

Often I question my courage (or cowardice) when I’m about to act (or not act) on something. Usually I lean towards the negative and say that I’m being a coward, especially if I’m not doing things because of resistance and fear. Or when I feel that what I’m doing is safe and doesn’t really matter to anyone else.

When I think of courage I think of heroic acts—saving people’s lives, a whistleblower bringing to light abuse of power and breach of trust, standing for justice and equality, or acts that change the course of history.

While these events may have a significant impact on our lives, they usually are not single incidents. They’re more likely the result of a sequence of events, and the involvement of more than one or two people.

When we focus on a few isolated acts, we ignore the day-to-day acts that are carried out by billions of people. We forget the life that is courageously being expressed with every breath, every move, every thought, and every act.

A while back I wrote about the superheroes of ordinary life. It seems I need to remind myself (and perhaps you) of the notion of courage. So today let’s bring courage back to reality—not the grand ideal that we try to measure up to.

If we truly look at the intricate details of our lives, we realize that we’re braver than we think. Everything we choose to do, or experience, can be an act of courage—good or bad, right or wrong, moral or immoral, kind or cruel, and all the shades in between.

“Courage, in the final analysis, is nothing but an affirmative answer to the shocks of existence.” ~Kurt Goldstein

Let’s look at the options below, and reflect on the courage they require—even if they may appear hard to fathom.

Getting up in the morning in spite of the million and one excuses we can come up with to stay in bed and not face the new day with its uncertainties and challenges.

Showing up and respecting our commitments, in spite of potential setbacks and disappointments.

Embracing change and taking on new things that are out of our familiar zone.

Being still, accepting life as it is, and letting go of chasing the new, or popular.

Being true to yourself, no matter how hard it can be, or how odd it may feel.

Pursuing a passion and going for it, bearing the risk of failure and disappointment.

Finding the joy in what we do, sticking with it, and not yearning for more glamorous achievements.

Dying young and leaving the world and its possibilities behind.

Falling in love and risking loss and a broken heart.

Falling out of love and letting go of what was that’s no longer working, and assuming the risk of being alone.

Being alone and being okay with our own company, regardless of societal norms.

Having kids and taking on the responsibility of parenthood with all its worries and fears.

Not having kids and accepting the judgment of others, and perhaps growing old on one’s own.

Being selfless and kind and helping others, even if it goes unnoticed or unappreciated.

Being selfish and focusing on one’s goals and dreams while keeping in mind the potential social and familial costs.

Holding a grudge and demonstrating to humanity the unnecessary pain of not letting go.

Forgiving and moving past the ego and its need for validation and retribution.

Saying yes to a new commitment or responsibility with all its demands and challenges.

Saying no and letting go of a potential opportunity and its rewards.

Taking chances on oneself, and giving it all, regardless of fear, or limitation.

Taking chances on others, and helping them reach their potential while taking on the risk of disappointment.

Failing, choosing not to be defined by failure, and moving on.

Accepting defeat and admitting that we lost, and enduring the bruises of loss.

Succeeding and taking on the responsibility and expectations that accompany success.

Breaking the law/committing a crime, and demonstrating the dark side of humanity, so the rest of us can awaken and evolve.

Being incarcerated, sacrificing one’s own freedom as a consequence of breaking the law, and perhaps experiencing inner freedom in confinement.

Being homeless, and trusting that life will provide.

Asking for help and allowing others to extend a helping hand.

Having little or no money, living on less, or on welfare, and allowing society to show its generosity and compassion.

Having lots of money and material wealth, and bearing the social responsibility that comes with wealth.

Letting go of anything that holds us back—regret, fear, shame, guilt, expectations, physical possessions and anything else that we feel attached to, or defined by.

Being famous and putting oneself out there for the whole world to see and judge.

Being anonymous and accepting being one of many without ever being known, or remembered.

Excelling at something, letting go of everything else, and being okay with all the expectations (and criticism) that come with mastery.

Being average and finding peace with not standing out, or being remarkable.

Leading and taking on the responsibility of your decisions and the impact it has on your followers.

Following others and trusting that they have a cause worth believing in.

Existing in this world with all its challenges and hardships, to live each moment, and each day, knowing that we may lose anyone, anything, or everything is the ultimate act of courage.

Leaving the world behind and moving on from this wondrous existence is our final courageous goodbye.

The world is full of brave beings who make our planet what it is today—the ones who passed on, the ones who exist now, and the ones yet to be born.

Courage is life and you are life. So …

You are courage personified.

“The courage of life is often a less dramatic spectacle than the courage of a final moment; but it is no less a magnificent mixture of triumph and tragedy.” ~John F. Kennedy

PREVIOUS POST: What Have I Done with My Life?